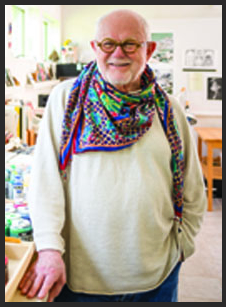 Tomie dePaola is celebrating his 60th year as a working artist, 50 of which have been filled with illustrating books for children, as well as his other projects including many one-man shows of paintings and drawings. He is the recipient of the 2011 Laura Ingalls Wilder Award honoring an author or illustrator whose books have made a substantial and lasting contribution to literature for children.
I studied Illustration at Pratt Institute in the early 1950’s.  It was the best thing I ever did.  It turned me from an art student into an Artist (not a children’s book illustrator yet—-that would come later).
In 1955, I spent the summer at Skowhegan School of Painting and Sculpture where I met Ben Shahn, a visiting faculty member. He noticed my work and for two weeks, he personally “mentored” me daily.  I learned so much from him, but there was one thing he told me that I would like to pass on.  Ben said, “Being an artist is not only what you do, but how you live your life.”
There is something else I’d like to share with you, too. This is a quote from Rilke’s Letters to a Young Poet. It’s applicable to anyone who is trying to create.  “As you unfold as an artist, just keep on, quietly and earnestly growing through all that happens to you. You cannot disrupt the process more violently than by looking outside yourself for answers that may only be found by attending to your innermost feeling.”
And a final word from me. COURAGE!

As a German major in college, I had no idea how many roads I would travel and the people I would meet while learning the language and teaching it to American students. After living as a student in Vienna in 1967, I would make many trips back to this place I call my second home.   My host family, the Bazants, invited me in 1974 to come teach English at an Austrian gymnasium, a combination middle and high school.  I learned a lot about my own native language that year, along with the Austrian school system while teaching at Sacre Coeur in Pressbaum, Austria.  Over the years I continued to study this language that I spoke for two years, hoping not to forget it.  And every time I thought I was done, finished with studying German and ready to give the books away, something would happen to alter the course of things.

“It’s in those moments of supreme happiness that one should remember the tears.”

Approximately seven years ago I had the good fortune to meet George Langnas.   In late December 1939 at the  age of 4 George arrived in New York from Vienna with his sister Manuela, age 6, accompanied by a family friend. His mother  Mignon (shown above) stayed behind in Vienna to take care of her sick and elderly parents.  It was seven long years years before Mignon would be reunited with her family in New York.  His father Leo sailed from the port of Hamburg on the USS St. Louis  in early 1939.   After being denied entry into the port of Cuba, the ship sailed up and down the coast of Florida.  It was not able to land on U.S. soil and was forced to return to Europe where the passengers were assigned to the countries of France, Belgium, the Netherlands and England.  Fortunately, Leo ended up in England.  He would finally make it to the U.S. to be reunited with his children in 1940.   Over the years George lost all knowledge of his native language German.   Around the age of 50 George uncovered extensive family material including letters and a diary related to his mother’s experiences while living in Vienna from 1939 to 1946.  With this new material George co-authored a book entitled  Mignon – Tagebücher und Briefe einer jüdischen Krankenschwester in Wien 1938 – 1949  (see translation above) with the assistance of Viennese researcher Elisabeth Fraller.  A paperback is available as an Ebook entitled “Mignon Langnas” -Tagebuch und Briefe 1939 – 1949.”  It is the family’s hope that the English version of Mignon’s story will be published.  It has been my privilege to work with George over the years, helping him relearn the language he spoke as a child.  In 2010 he was able to realize the dream of telling his mother’s story – a long journey of tears, separation, strife, survival and the devastating price that many paid during World War II.

Above is a picture of Manuela and George Langnas with their father Leo during a visit to the orphanage where the children lived for a short time. 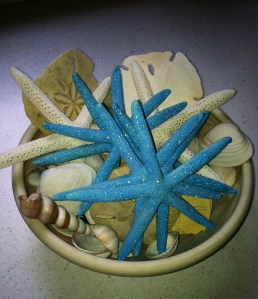 In 2012 author Corinne Ruff and Illustrator Lisa Benjamin put together a collection of contributions from those who have loved and lived on Long Beach Island, New Jersey.  In “Life Lessons” some lucky entries from “island children” of all ages were chosen and showcased for the book.  My paragraph was chosen in the chapter subtitled “Starfish.”  I am most grateful to my friends JoAnn and Don Fannon who have shared their beach house in Ship Bottom on LBI with me.   It continues to feed my soul every time I am there.

When I walk along the shore of the Island, I never tire of seeing myriad numbers of sea creatures – from the channeled whelk to the sand dollar to the thousands of colored shells deposited on the shoreline.  I stop and look in awe and think of the long journey they took before these sea creatures arrived at the water’s edge.  The lesson I learn is to admire the beauty, the symmetry and the utter uniqueness of each of these small miracles of nature.  On my walk I hope to be inspired to go deep within myself to create something of beauty so that I, too, may leave something behind  in my creative journey – just like the ocean does every minute of every day, 365 days a year.  And I hope my art will inspire others just as the Island continues to inspire me and attract people of all ages to come, look, listen and take in every aspect of its beauty. 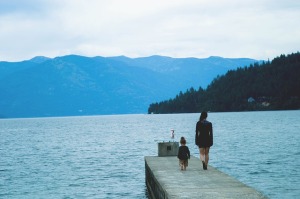 I just stared at her, not understanding why she and the other girls were giggling.

I followed their eyes to the source of the joke and realized my slip was showing.

I had never heard that expression before and had no clue as to its meaning until now.

But on that morning I didn’t care about being the center of unwanted attention.

My baby sister had just died.  She lived for only ten hours.

Those girls could not have known.

I just grimaced as if I got the joke and looked away.  I don’t really remember if I

was going  to church or to class that day.  It’s all a blur now as I try to recall that moment.

Time kind of stood still and I felt numb.

Earlier that morning when I asked if we could visit mom and the baby, my father said, “Regina, the baby didn’t make it.”

No one took me to the hospital to see my baby sister and she was never talked about again.

Her grave marker simply read “Baby V.”  Only one word and an initial to mark a short life.

My two brothers and I would be the only children  mom and dad would have.

A few weeks after the death of my sister, I came home from school to find a priest from

our parish talking to my mother in our living room.  I could only hear whispering and I

knew it was private, so I did

not linger.  I needed to figure out a way to live without my sister.

heard about the baby that died. I told them it was ok, that I was ok.

Nothing was further from the truth. I would not be fine for quite a while.

Had she even existed, even if only for a few hours? There was a lot of

silence in my house. I would have to deal with my loss in private. And that

is the path I chose, even till this day, many years later. I say a prayer for her

soul and I think of her every now and then. I know I will see her in heaven

one day and I picture our reunion. That brings me joy and is enough for

“All that I am or hope to be, I owe to my angel mother.  I remember her prayers, and they have always followed me.  They have clung to me all my life.” –     Abraham Lincoln

My mother Carmel “Dolly” Visconti passed away in January of 2015.  I share the sentiments of Mr. Lincoln.

Thank you for expressing what I could not.