On July 2, 2016 an uninvited guest showed up in our front yard.  I was aghast as my husband called out to come quickly to the top of our driveway.  He had been weeding alongside a small evergreen tree when his gloved hand came within an inch of a four-foot long black snake that then slithered away from us as we looked on in amazement.  But not before it stopped and coiled up, ready to strike in case we dared come any closer.

I grabbed my iPhone and began to videotape the snake as he made his way toward cover, narrating for my grandson the arrival of this most unwelcomed visitor.  Attempting to mask the fear in my voice, I told him the snake was just being a snake and trying to get away from us.   We watched as the nearly 48-inch-long, maybe even 60 inch-long, black creature disappeared into some low-lying brush.

My cousin, a Master Gardner, later said it might be a Black Racer and if it were, it would be beneficial for our yard since this species will eat small rodents, frogs and voles.  I have to admit it’s a very cool name for an animal that does not summon a lot of positive feeling when seen in the wild, or in one’s backyard.  I like to think of my surroundings as a haven for robins, cardinals, chipmunks and squirrels, not crawling reptiles.

I prefer to see them in a controlled environment – behind glass in a zoo.  I have no problem with an occasional garter snake;  they are fairly cute.  Last year one made his home in a narrow opening between a sliding door and cement step leading out to a patio.  I could peer out at him every so often and see him in the crack where he apparently enjoyed some welcomed shade.   I made up stories about him for my grandson and named him Sherman.  When we no longer could find him, I explained he had most likely returned to his family in the woods.

This year may be different.  I’ll have to come up with an endearing story, this time about the four-footer.  It won’t be easy, but calling him a Black Racer (even if he is not that species) will light up the eyes of this five-year-old, hopefully making him less fearful and allowing his imagination to run wild, conjuring up all kinds of possibilities as to the snake’s whereabouts and activities.  I, on the other hand, will be very happy never to see him again.  The reality is, however, that he is very likely somewhere in the yard, as afraid of meeting me as I am of him.

Black Racer makes it into our local newspaper, The Gazette 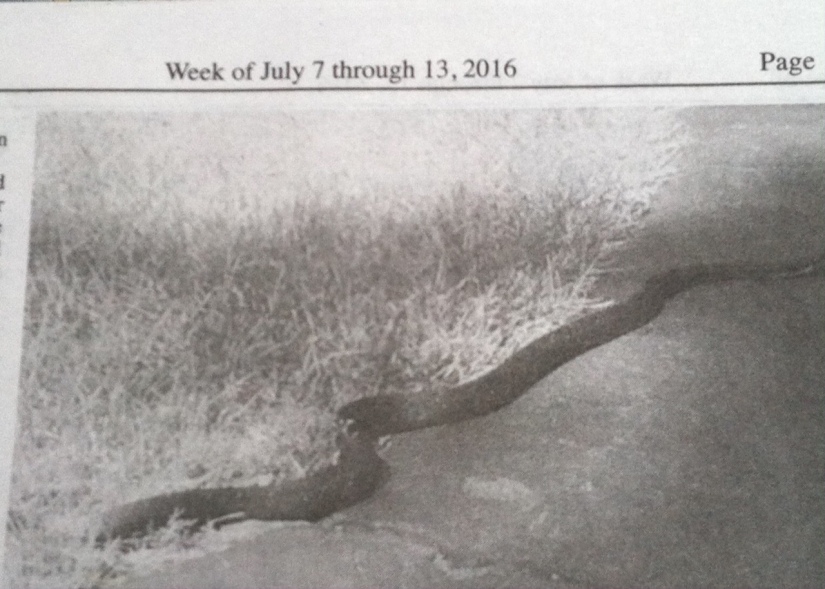 I am a children's book writer and contributor to Kids Imagination Train, a free online children's magazine. I hope to be a published author of picture books one day. I have a Master of Education degree and have taught English and German. View all posts by regm55